Cancer is such a common disease that it is no surprise that many families have at least a few members who have had cancer. Sometimes, certain types of cancer seem to run in some families. This can be caused by a number of factors.
But in some cases the cancer is caused by an abnormal gene that is being passed along from generation to generation. Although this is often referred to as inherited cancer, what is inherited is the abnormal gene that can lead to cancer, not the cancer itself. Only about 5% to 10% of all cancers are inherited. This document focuses on those cancers.

Cancer is a disease of abnormal gene function. Genes are pieces of DNA (deoxyribonucleic acid). They contain the instructions on how to make the proteins the body needs to function, when to destroy damaged cells, and how to keep the cells in balance. Your genes control things such as hair color, eye color, and height. They also can affect your chance of getting certain diseases, such as cancer.
An abnormal change in a gene is called a mutation. The 2 types of mutations are inherited and acquired (somatic). 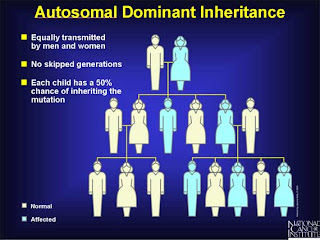 Genes are found on long strands of DNA called chromosomes. Humans have 23 pairs of chromosomes in each cell. We inherit one set of chromosomes from each parent. Each chromosome can contain hundreds or thousands of genes that are passed from the parents to the child. Every cell in your body has all of the genes you were born with. Although all cells have the same genes and chromosomes, different cells (or types of cells) may use different genes. For example, muscle cells use a different set of genes than skin cells use. The genes that the cell doesn't need are turned off and not used. The genes that the cell is using are activated or turned on.