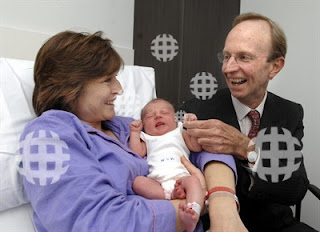 Malcolm Catt died on Australia Day after liver
cancer took hold of him suddenly after some
time in remission
He always sat right up the front and sang the
hymns well.
I didn’t know he was a musician. He had his
LMus. A in piano at 15 and played a Mozart
concerto under Sir Eugene Goossens. He
regularly played chamber music and often
performed concerts with the Central Coast
Orchestra. Indeed, he came from a very
musical family. His sister is the Director of
Music at the historic South Brisbane St.
Andrews Anglican Church where she is
overseeing the restoration of their historic
organ. He gave up a musical career to become
a leading obstetrician. However, he was an
organist at the Gosford Uniting Church.
Malcolm’s funeral was held on Wednesday,2nd
February at 10 am, conducted by the Rev. Dr
David Gill and the Rev. Graham Woolnough of
Gosford Uniting Church.
The family requested the presence of the choir
to lead the hymns. The soloist was Matthew Cin
who sang in January at the last service Malcolm
attended which meant so much to him in his
dying days. By request Byron Westbury played
the trumpet.
The fact that the church was packed with
mourners on a working day attests to the high
regard in which this gentle man was held.

* I wanted to share this with you. A local leading obstetrician.
He found my first cancer, it was rare he had never seen
it before but he acted in an amazing manner. I wanted to
say doctors are amazing we trust them with our lives. Malcolm
Catt was a very nice man, cancer awful disease. RIP Dr Catt
Sharing this as they are human, we forget that.