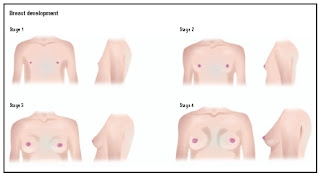 In Stage 1 shows the flat breasts of childhood. By Stage 2, breast buds are formed as milk ducts and fat tissue develop. In Stage 3, the breast become round and full, and the areola darkens. Stage 4 shows fully mature breasts.

(Illustration by GGS Information Services.)
period begins. Usually these signs are accompanied by the appearance of pubic hair and hair under the arms.
Once ovulation and menstruation begin, the maturing of the breasts begins with the formation of secretory glands at the end of the milk ducts. The breasts and duct system continue to grow and mature with the development of many glands and lobules. The rate at which breasts grow varies significantly and is different for each young woman. Breast development occurs in five stages:
The entire process from the breast bud stage through stage five usually takes about three to five years, but for some girls it takes close to ten years. After these five stages, the breast is still not considered mature or fully developed. Only pregnancy brings about the fullness of breast growth and development.
Each month, women experience fluctuations in hormones that make up the normal menstrual cycle. Estrogen, which is produced by the ovaries in the first half of the menstrual cycle, stimulates the growth of milk ducts in the breasts. The increasing level of estrogen leads to ovulation halfway through the cycle, and then the hormone progesterone takes over in the second half of the cycle, stimulating the formation of the milk glands. These hormones are believed to be responsible for the cyclical changes such as the swelling, pain , and tenderness that many women experience in their breasts just before menstruation. Many women also experience changes in breast texture, with breasts feeling particularly lumpy. This, too, is related to the glands in the breast enlarging in preparation for a possible pregnancy. If pregnancy does not occur, the breasts return to normal size.

Breast development can start in a girl as early as eight years or as late as 13 years. If a girl does not have breast buds or pubic hair, which is the first signs of puberty, by age 14, there may be other medical problems. Most girls begin menstruating between ages nine and 18, with an average around 12 years of age. Primary amenorrhea is the absence of any menstrual flow in a girl who has never menstruated by the age of 16. Primary amenorrhea is not considered to have occurred until a girl is beyond age 16, if she has undergone other normal changes that occur during puberty. Primary amenorrhea may occur with or without other signs of puberty, but this condition is rare in the United States occurring in only about 0.1 percent of all girls.
There are many possible causes of primary amenorrhea, including malnutrition , extreme obesity , genetic disorders, endocrine (hormonal) disorders, pituitary tumors, congenital abnormalities, anorexia nervosa , bulimia, and, of course, pregnancy. Emotional distress or crisis about being different from friends or family can occur.

Parents should become concerned if their daughter shows no signs of breast development by age 14 and if by the age of 16, there has not been a menstrual period.