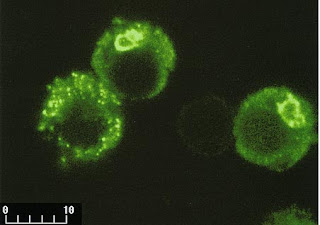 Prolactin, often called the "mothering" hormone, is secreted in the anterior pituitary. During pregnancy prolactin is essential for complete lobular development in the breast. Prolactin levels rise from a non pregnant baseline of 10-25 ng/mL to 200-400 ng/mL at term Progesterone antagonism from the placenta enables the prolactin level to rise without subsequent milk production.
Progesterone interferes with prolactin's activity on the cell receptor sites in the alveoli of the breast.With the birth of the placenta, and the sudden drop in pregnancy hormones; progesterone and estrogen, the elevated prolactin level brings in the milk supply. Prolactin is released in pulses directly related to stimulation of the areola or breast. "For any hormone to exert its biologic effects, however, specific receptors for the hormone must be present in the target tissue " Frequent feeding in the early days increases the number of prolactin receptor sites within the breast. The implication from research is that "the controlling factor in breastmilk output is the number of prolactin receptors [in the breast] rather than the amount of serum prolactin " These prolactin receptors are laid down in the first 3 months postpartum. The prolactin receptors in the breast allow abundant milk production to continue when total baseline prolactin levels drop over the first 3 to 4 months. Even with more "normal" baseline levels, breast stimulation continues the doubling of the declining baseline prolactin levels into the second year . 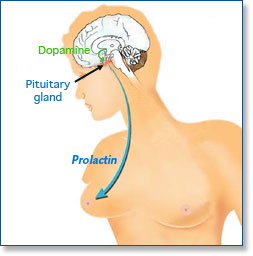 The prolactin receptor site theory raises serious concern over progesterone laden birth control methods when started within days of the birth. Depo-Provera (medroxyprogesterone acetate) shots are often given immediately postpartum, while the mother is still in the hospital. If progesterone is an antagonist to prolactin, logic dictates that progesterone shots, implants and pills would inhibit early establishment of milk production. Elevated prolactin levels in the early days of lactation help milk and receptor site production. Each nursing produces a doubling in serum prolactin levels. Prolactin level naturally rises in sleep states Night nursings help maintain an elevated baseline prolactin level. Thus, it is unwise for a mother to skip breastfeedings at night (having someone else give bottles) if she wants to develop a good milk supply. Frequent prolactin release inhibits follicle stimulating hormone (FSH) and luteinizing hormone (LH), causing lactational amenorrhea preventing the return of fertility Prolactin is biologically potent for the infant. Milk prolactin levels are highest in colostrum and transitional milk. In mature milk the highest prolactin concentration is in the foremilk. In the infant gut, prolactin effects fluid and electrolyte exchange in particular, sodium, potassium, and calcium.
#iamstillawoman #prolactin #breastfeeding #mothersmilk