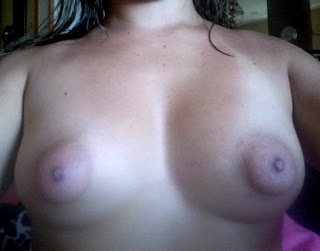 If your nipples are 'puffy' and not constantly erect they are called flat nipples. That is perfectly normal too, and fairly common among teens. Typically the nipple "sticks out" (becomes erect) when stimulated by cold, clothing, or rubbing.
This puffy or flat appearance may stay as it is until a woman becomes pregnant. For most women with flat nipples, the nipples evert (poke out) during pregnancy as the elasticity of the skin changes. Even if not, a full-term baby can usually suck out a flat nipple.
Also it's a total misconception that all females get erect nipples in sexual activity like men get an erect penis... not every woman does. Nipples are not to be compared to penises. The organ in females that corresponds to the male penis is clitoris, and clitoris can and does become erect (it is just harder to notice).