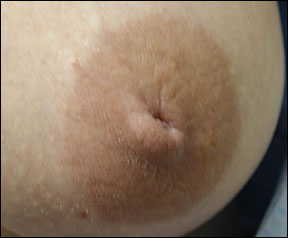 An inverted nipple is 'turned inside' instead of pointing outside. It appears like a indentation in the middle of the areola.
It is possible to "coach" the inverted nipple out so it becomes an 'outie' and everts.
If a nipple that was an "outie" suddenly inverts, this along other symptoms such as itching and pain may be a sign of inflammatory breast cancer.

July 01, 2012
Someone once wrote"... when i get really cold, or get goosebumbs all over my body, the whole things really scrunch up, like, my entire areola scrunches itself up into a wrinkled little mound. it looks really weird and ugly, and i haven't ever seen other people's breasts do it. what is wrong with my areola/nipples??" The answer: Well nothing is wrong. This is what my areola does too. It's a normal reaction to the coldness or to irritation / stimulation. The little muscles in the areola do a similar goosebump thing as your other skin can do. People often call this phenomenon "hard nipples". Also note that skin on areola has less feeling or sensation to it than other areas of your body. If the areola was very sensitive, then breastfeeding would probably be quite uncomfortable because the baby pulls and tugs it! The nipples are sensitive but the sensitivity changes with hormonal changes, such as occur at mestrual cycle or pregnancy. Also this v
8 comments
Read more

September 03, 2012
By Alex Tresniowski With Her Family by Her Side, Linda McCartney's Long and Winding Journey as Mother, Wife, Artist and Crusader Comes to An All-Too-Untimely End      There were 36 phone messages waiting for freelance music writer Danny Fields when he returned to his Manhattan apartment April 19 after a weekend trip. Reporters were calling about the death of his close friend Linda McCartney, who had died two days earlier at age 56 from breast cancer that had spread to her liver. Devastated by what he heard, Fields reached for the phone. "I called Paul right away," says Fields. "I said, 'Oh, Paul,' and his voice cracked for 10 seconds. We both started to cry. But then I couldn't stop, and he was consoling me. He said, 'Wasn't she great? Wasn't she beautiful? Wasn't she smart and together and wonderful and loving?' " Praising his wife was an occupational as well as an emotional habit for McCartney, 55, who wrote doze
1 comment
Read more

February 28, 2018
QUOTE OF THE DAY "A leader is one who knows the way, goes the way, and shows the way." -  John C Maxwell   #quoteoftheday #quote #iamstillawoman #johncmaxwell
1 comment
Read more