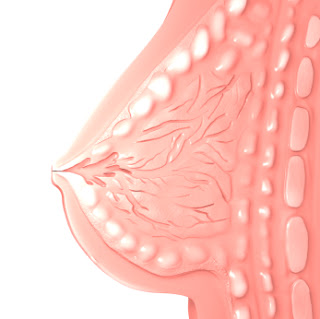 The surface tension in the breast is sustained so that milk does not freely move out of the breast. The milk ejection response (MER) is the action of oxytocin upon the smooth muscle of each alveolus at the microscopic level. Contraction of the alveoli actively push the milk into the ducts toward the nipple and finally to the infant. (Lawrence and Lawrence 74) As the baby continues to nurse additional MER's occur. In the early days of nursing, it may take five to eight minutes for the first let-down to occur. Oxytocin, like prolactin, is released in pulses. It has a very short life span in maternal serum. The first pulse begins before the baby is put to breast (triggered by mother thinking its time to feed or infant crying). Subsequent release is in response to nipple stretching. The uterus contracts from oxytocin release. In the early days of breastfeeding these "afterbirth pains" can be very uncomfortable.  The higher the mother's parity the more intense the afterbirth pains. Mothers are very concerned when they cannot feel the let-down in the postpartum period. This lack of sensation is normal. The mother can be taught to observe the infant for bursts of swallowing, uterine cramping dripping milk, sleepiness and/or thirst as cues that a let down has occurred. After the first week or two, mother will usually begin to feel the let down. Most mothers state they only feel the first let-down in a feeding. This may be due to the distention of the ducts with foremilk. A few women are aware of each let-down. The let down reflex can be felt as a tingling sensation. Occasionally, women may describe the let down as a burning or painful sensation.